Thoughts For My Grandchildren

You’re not even old enough to read yet, but I’m such a slow writer that I think I better start now to put down the thoughts I want to convey to you. If I remember correctly, trying to think back, I believe it’s around the age of 16 or 17 that adolescents start to tune in to adult conversations about “life” and “the world” and “serious things.”

So I’ll take my time formulating my thoughts as I enjoy watching you grow. Surely, in what seems to me to be the long, strange trip of my Life, I must have learned something that you’ll find a little interesting or a little valuable.

In any case, by the time I present you with these notebooks I’m confident we’ll still be loving each other so much that you’ll be inclined to humor me and at least give my rummagings a look-over.

I wish you all the very best in life. And there are many good things. 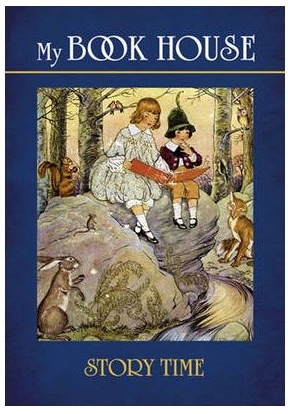 Last year Grammy and I gave you the set of My Book House volumes that her parents gave to her when she was your age. Twelve volumes to engage you as you grow, from “Story Time” to “In the Nursery” to “The Treasure Chest” to “Halls of Fame.” A treasure, indeed.

When we read them to you it’s clear (to us) that they come from another time… a quieter time; a more optimistic time. The first entry is a tiny poem by Robert Louis Stevenson:

The world is so full
Of a number of things,
I’m sure we should all
Be as happy as kings.

Just as I said! Many good things — sensations and experiences and wonders. But…

Well, there are a lot of buts. We’ll leave that to later.

All of you will be fully creatures of the 21st century. Having been born so early in it, you’ll identify with it and hopefully you’ll see most of it unfold. There are the usual “visionaries” right now predicting that unbelievable breakthroughs in science and medicine will enable members of your generation to live well past 100 and so into the 22nd century.

I’m doubtful. In fact, it may be your generation that finally says “enough” regarding the preoccupation with life-extension. Already, now, too many people are suffering too much through too many decades of old age.

In fact, it may be your generation that says “enough” in regard to quite a few of the things that have characterized the human project of late.

My writing that should give you a sense that I think you’ll be living through special times. That’s indeed the case and it will be a major theme of these notebooks.

You’ll take a road trip or two (or two hundred!) in your lifetime and you’ll see maps along the highways with a little red arrow: “You Are Here.” I want to try to give you an orientation like that vis-a-vis the expanse of human history.

My time-map, though, won’t be able to give you specific directions regarding the question “Where To Go From Here.” You’ll have to discover that by yourselves.

Many around you will fail to even consider the question. Your peer group will be middle class Americans of the 21st century and I’m willing to bet that you’ll find a lot of complacency among them. You and they will notice signs of decline and deterioration around you. Such will likely be a topic of conversation, but I don’t think the decline will cause you much in the way of suffering, and most of your peers will hardly react.

America has been very well off for a very long time. And things don’t change all so fast. The wealth that this country built up over the period of its first two hundred years of existence (three hundred years if we extend our scope back into the colonial period) was unprecedented — almost unbelievable. It’s dissipating now, but not all so fast. In your time, as in mine, it will continue to seem as if many of the problems needing attention are more of surfeit than of scarcity.

For the sake of your own happiness, your personal life- satisfaction, I hope that you won’t be among the complacent. Because the reality you’ll be facing is sure to be disconcerting for the complacent…characterized by scarcities very subtle but very deep. Many of my own generation were disconcerted when the original stories conveyed to us about our circumstances of life turned out to be misleading, or worse. The disillusion was painful.I guess one of my motivations is to spare you that.

Maybe what I can convey to you about these times will help orient you, ground you…even console you. Or maybe that’s just another delusion on my part. Maybe the ideas of one generation can’t be fully conveyed in the language of the next. I’m hoping that love transcends language. I’m trusting that meaning is universal. Anyway, let’s begin.

As you grow you’ll be ushered into a special world — the world of people. It’s not quite the same as the world of life. It’s narrower. And it’s harder.

“Special” might sound like good news, but it’s not necessarily. We’re going to be talking about the inherent specialness of the human condition, on the one hand, and the problematic specialness of the times we’re living through, on the other. You need to know about both. They’re related. They’re both major factors in our lives. But people have a tendency to get them mixed up…as if the problems of the times are unavoidable due to “human nature.”

You’ll hear people say: “Things have always been this way and always will be.” But that’s not true. I said something before about wanting to “spare you.” This is actually a common feeling, on some level (sometimes “under the surface”) among parents and grandparents.

There was a book written during the middle part of the last century that was a phenomenon in many ways. The Catcher in the Rye was a big best-seller and its author became renowned, but one aspect of the phenomenon centered around a question: Why did the book have such widespread appeal? It was not all so well written, it had little in the way of plot or mystery or drama. It was not uplifting or particularly inspiring. I think the answer to the question has to do with the chord it strikes relating to deep feelings we all have about the process of becoming human, the process of “growing up”…especially in our culture, especially in these times.

The protagonist of the book wanted to save the children. From what? He sensed something wrong in the world of people, but he couldn’t quite comprehend it. He, like many, wasn’t able to separate out the general human challenges that every person, generation, and culture must face up to from the specific problems of modern times, problems that need to be resolved. Much thinking has been done since then about these very important issues.

What I can explain to you has been made possible by the work of many insightful people in fields as diverse as anthropology, sociology, psychology, biology, and even political science. Literature and poetry, too. We’ll delve into these ideas as we try to situate you and your prospective experiences on the time-map we’ll be developing. …